Traditional Dances and Folklore: in the Inn, in the Firehouse and on Stage

Dance has accompanied people since time immemorial, undergoing changes along with social and cultural transformations. In the majority of traditional societies, dance constituted an important component of customs, ceremonies and rituals, playing important social and religious roles. In traditional rural and urban cultures, dance was taught almost solely through direct oral transmission, imitated by children and re-enacted in adult life during village or town feasts, family celebrations, weddings, or the carnival.

Many elements of the former folk culture as famously described by Oskar Kolberg have not survived until today, evolving into other forms. Transformations also affected dances, which have changed in terms of form, content, and meaning. Some forms and meanings vanished along with the old rites, others gained new significance or adapted to new cultures or traditions. Major factors in this respect included migrations of population, dissemination of Christianity, wars and partitions of the country, and its commercial contacts.

It is difficult to propose an unambiguous classification of Polish traditional dances. The same or nearly identical dances sometimes appeared under different names, or the other way round: the same name denoted dances completely dissimilar in terms of their structure and significance.

The framework typology adopted by this website distinguishes between non-stylised and stylised dances. Such general categories enable us to present a rich variety of dances through textual description and video clips, while also retaining their transformative continuity. It also facilitates the presentation of greatly diversified interpretational approaches among contemporary dancers.

The first group includes both those dances which are most immediate to the earliest traditions, performed by the oldest dancers, as well as those separated from their original context and transplanted on stage. We wish to present as many traditional dances performed without individual displays and choreographic “amendments” as it is possible in accordance with accessible sources, preserving their original form, now rarely encountered in the Polish countryside. The majority of dances witnessed in both rural and urban areas feature arrangements for stage ensembles which largely subject their symbolical meaning and mould them to the requirements of stage performances. Still, they too provide a valuable contribution to the specificity of individual dance forms.

The other group of dances presented on the website are stylised dances, including the stage versions of Polish national dances, which are actually artistic variations on the themes of traditional dances, created by professional choreographers and dancers with a view to presenting them on stage. 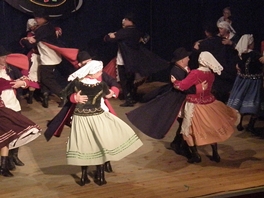 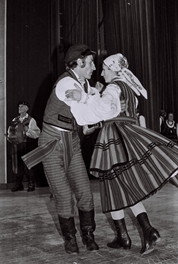